PLOT-Doc meets Crocker Fenway and arranges to trade the heroin in return for an assurance that Coy Harlingen and family wont be harmed. The trade takes place without any double cross.

Whilst waiting for Fenway, Doc inspects a mural depicting the arrival of the Portola expedition in 1769. In terms of local karma, this is as close as one gets to original sin. The mural, however, is clearly not to be trusted as historical record.

The pictorial style reminded Doc of labels on fruit and vegetable crates when he was a kid. Lots of color, atmosphere, attention to detail… Everybody in the scene looked like a movie star.

It’s style is that of advertising and commerce; the people are substitutes; the details it pays attention to are not those of history. However, the labels are worth a look: 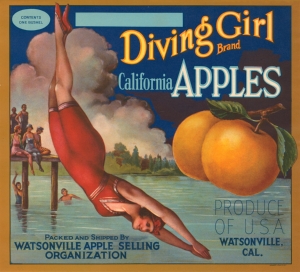 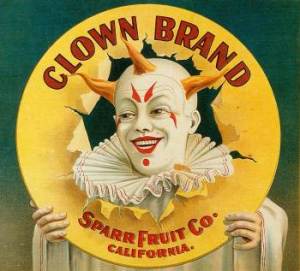 Pynchon then produces a piece of imperial rhetoric to describe one of the expressions of the men in the mural:

There was an expression of wonder, like, What’s this, what unsuspected paradise? Did God with his finger trace out and and bless this perfect little valley, intending it only for us?

This perfectly reproduces the sense of divinely ordained entitlement that lies behind exploration and conquest, with the notion of God ‘intending it only for us’ being especially sharp in its denial of the rights of any indiginous people. However the mural, for all its flaws, is still a reminder of the past, which thus allows for some debate about the nature of that past. Crocker (who is shortly to give one of the most villainous speeches of the book) says ‘Never noticed it really.’

feature some of the harshest, most political exchanges of the book, in which Doc sounds far more world-weary than when he began.

Crocker Fenway chuckled without mirth. “A bit late for that, Mr Sportello. People like you lose all claim to respect the first time they pay anybody rent.

“And when the first landlord decided to stiff the first tenant for his security deposit, your whole fucking class lost eveybody’s respect.”

“Every time one of you gets greedy like that, the bad-karma level gets jacked up one more little two-hundred-dollar notch. After a while that starts to add up. For years now under everybody’s nose there’s been all this class hatred, slowly building. Where do you think that’s headed?

I think this is the first time that the karmic equation has been invoked to explain something other than a present ill; it is here being used in a predictive fashion, and aimed at a specfic group of people, as opposed to all of ‘us’.

The lines are then drawn even more clearly:

“We’ve been in place forever. Look around. Real estate, water rights, oil, cheap labor- all that’s ours, it’s always been ours. And you, at the end of the day what are you? one more unit in this swarm of transients who come and go without pause here in the sunny Southland, eager to be bought off with a car of a certain make, model, and year, a blonde in a bikini, thirty seconds on some excuse for a wave- a chili dog, for Christ’s sake.” He shrugged. “We will never run out of you people. The supply is inexhaustible.”

A pretty fair summary of the capitalist system.

“What, I should only trust good people? man, good people get bought and sold every day. Might as well trust somebody evil once in a while, it makes no more or less sense. I mean I wouldn’t give odds either way.”

Denis’ response is to say ‘That’s heavy,’ then, after a toke, ‘What does that mean?’- the pattern of pronouncement/avoidance/humour that is common in Pynchon.