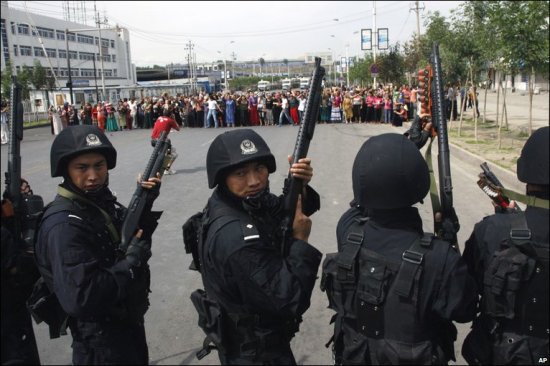 Chinese official sources are reporting what appears to be a counter-protest in Urumqi, this time by Han Chinese. They report that several thousand people

“armed with clubs and knives.. marched along the Youhao Street and Guangming Street toward Erdaoqiao Roadin downtown Urumqi Tuesday afternoon. The protesters, mostly Han Chinese, were shouting “protecting our home, protect our family members”. Police armed with guns and shields guarded intersections. A Xinhua reporter saw a police officer crying while he followed the march.Many of the protesters gathered at the Urumqi South Railway Station, Changjiang Road, Yangzijiang Road and some other places. People ran in panic and roadside shops were shut down. Residents of some community compounds were holding bats for self-defense.”We will not hide up anymore. We will fight back if they (the rioters) come,” said a man standing in front of a building in Shihezi. Crowds of people rushed to the municipal people’s hospital to take shelter. Many nurses were trying to call their relatives to make sure they are safe. An adult who was coughing up blood and a young man whose head was covered in blood were rushed to the hospital for emergency treatment… Someone drove a car into a police wagon during a standoff with police at Tuanjie Road at about 1:30 p.m.. Police have arrested a number of people. The number of arrests in the latest outburst is unknown at this time.

I’m not sure what to make of the tone of the Chinese report. It’s unusual for the Han to be portrayed as being so aggressive. It doesn’t read like a threat, or an act of self-defense. If anything, the report seems almost bewildered by the way in which things seem to be slipping out of the government’s control.

The BBC have since confirmed that a demonstration by Han Chinese took place. Hundreds of Han Chinese marched through the streets of Urumqi smashing shops and stalls belonging to Uighurs. Reuters reported that some Chinese protesters shouted “attack Uighurs” as both sides threw stones at each other. One Chinese protester, clutching a metal bar, told the AFP news agency: “The Uighurs came to our area to smash things, now we are going to their area to beat them.”