Yesterday a mob (I think this is a fair way to describe a crowd of people armed with iron bars, meat cleavers and shovels who are shouting angry slogans) of Han Chinese attacked Uighur neighborhoods in Urumqi, in apparent retaliation for Sunday’s violence. Though there were reports of beatings, no casualties have been confirmed (which did not stop the World Uyghur Congress from reporting a long list of atrocities:

A Uighur woman who was carrying a baby in her arms was mutilated along with her infant baby… over 1,000 ethnic Han Chinese armed with knives and machetes marched into Xinjiang Medical University and engaged in a mass killing of the Uighurs… two Uighur female students were beheaded… their heads were placed on a stake on the middle of the street.

This post seems to have since been removed from their site (and it is important to stress that there has been absolutely no indication of any such horrific events), in favour of reports that rely more on the major news providers.

Today, the BBC are reporting a massive troop influx into the city (some estimate 20, 000). They show footage of soldiers marching through the streets; there is talk of it being ‘martial law in all but name’.

Interesting, their footage (which looks to be in a central, Han area) shows people going about their daily business. No doubt the increased troop presence has reassured them there will not be a repeat of Sunday’s violence (a retaliation for their retaliation).

The BBC also have this photo of a Uighur neighborhood, where residents are apparently blocking off a street. Perhaps they are less reassured by the massive influx of troops. 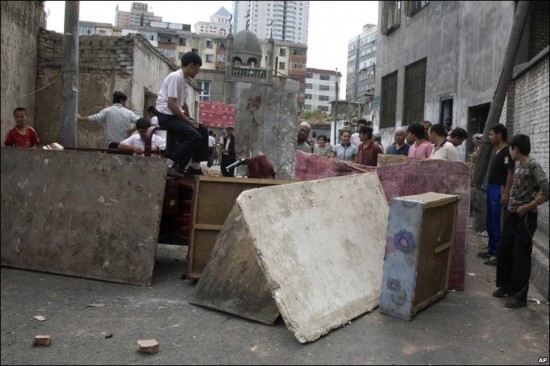