Whilst it is both predictable and a cliche to bemoan that a film, whatever its very different goals, does not ‘succeed’ to the same extent as its source material (usually a book, but I suppose this could apply to all sorts of things. For example, few would disagree that the film of Street Fighter was a huge disappointment compared to the beloved arcade game) in this case I’m going to bother, because the film adaptation of Richard Yates’ Revolutionary Road clearly reveres the 1961 novel and wants to do right by it. The screenplay preserves much of the dialogue, and makes few (if any) deviations from the book’s main narrative, other than to omit the opening chapter where the Laurel Players prepare for the play (more on this later).

The problem is that as in Sam Mendes’ previous films (American Beauty, Jarhead, Road to Perdition), the director’s approach has mostly been to try and shoot the film as if it were theatre (yes, even in the Iraq-based Jarhead). In concrete terms, this means he rarely moves the camera, and relies on close ups or medium shots of the actors.

During dialogue, Mendes’ preferred tactic is often to use a series of reverse angles, much as if the heads of an audience member in the stalls were turning first this way, then that, to track the conversation on stage.

We might excuse this kind of thing if it was actually a play that was being filmed (due to physical and temporal limitations) but in the cinema, where, let’s face it, anything is now possible, the task of the director is surely to do more than merely present events. His or her job, I would argue, is through their control of mis-en-scene, to comment on the events of the narrative, whether it be to reinforce or undermine what appears to be taking place. This, I think, is one of the reasons most adaptations (though perhaps not Street Fighter, whose reasons for failure must remain elusive) fail to live up to their origins. While the general sequence of events is easy to preserve, much of a novel’s colour and mood depends on those passages (usually descriptive, either of external details or internal states) where little may appear to be happening. It is precisely the task of the director (and perhaps the screenwriter) to find a way of translating these elements to a primarily visual medium, whether that involves radical structural changes (as in Mike Nichol’s version of Catch 22) or minor (but cumulatively significant) choices of shot that suggest an attitude to the material (as in Kubrick’s painterly tableuxs in Barry Lyndon, one of whose effects is to contribute to the overall sense of the characters being fixed in their social places. It also reminds us of the artificiality of what we are watching, which in a Brechtian manner reduces the possibility of us engaging with the subject matter on an emotional level. 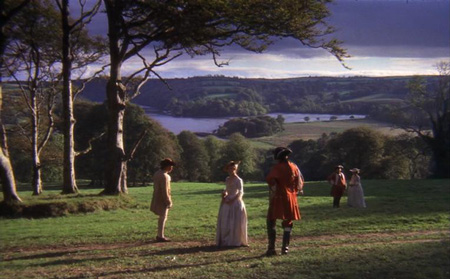 It also suggests to me a new way of looking at the Old Masters, to in a sense unfreeze the picture, to think of what led to the moment depicted, what might unfold from it. 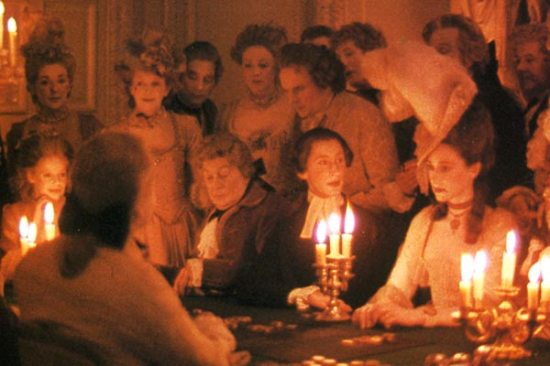 In the case of Revolutionary Road, there seems to have been an implicit trust that the virtues of the book were so instilled, so estimable, that they could not help transfer (perhaps through the ether) to the humble screen, and that to alter the material greatly could only endanger this process (which did not, however, prevent the screenwriter from giving April Wheeler the line, ‘You’re the most beautiful thing in the world- a man’).

For a further review (which has its doubt about the novel as well): A Better Life: The Current Cinema: The New Yorker

I also have my doubts, though I think there is much to admire on the whole, especially its delineation of the charcters’ “postures of controlled collapse” (the phrase belongs to Richard Ford, from his introduction to the novel). My own uncertainty surrounds the general voice of the book, whether it is at times too direct in its attempt to convey the hopelessness of practically every character. The novel’s opening chapter, which the film omits, is so effective in conveying the atmosphere of futility of the novel, that I almost felt the rest was redundant. Even the opening has this marked sense of disappointment:

The final dying sounds of their dress rehearsal left the Laurel players with nothing to do but stand there, silent and helpless, blinking out over the footlights of an empty auditorium.

Another difficulty (though obviously not the fault of the novel) is that we have been presented with so many suburban dramas about unhappy couples in the 50s and 60s that it is difficult to muster much enthusiasm. The success of Mad Men is that it functions on both a historical and individual level, and of course is able to do so because of its distance from the period it depicts. There we can understand something of the complex interplay between the changes (or lack of) in both people and the society they inhabit.  Whilst Revolutionary Road, in its title, and and the aspirations of April Wheeler, alludes to the lost innocence of 1776 (when America declared independence), for me the novel fails to work on a symbolic level. If Yates wished to argue that the dream that was America had not only run aground, but foundered (alright, maybe we don’t need convincing of that), the novel perhaps needed a broader scope (which Mad Men is more sucessful at, and, in future seasons (thank you!) will no doubt build on).

Finally, for anyone whom the film has put off Yates’ work, let me implore you to consider The Easter Parade, which I found both more subtle and compelling. It begins, “Neither of the Grimes sisters would have a happy life…”