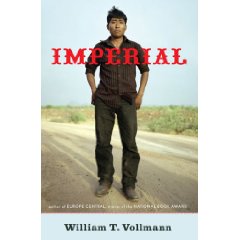 Interviewer: I want to talk about your artwork on the walls here. There’s so much sexuality- particularly female sexuality- represented. Tell me about it.

Vollmann: Oh, it gets my dick hard, sweetheart.

William T. Vollmann, at age 49, has already written too many damn books, more than I will ever write, let alone get published. This is not really a complaint. I am delighted that an author of his ability is able to be so productive: 19 or so large books, some fiction, some non-fiction, the longest being Rising Up and Rising down, which, in its unabridged form, clocks in at 3,300 pages. I have only read a few of these, but from You Bright and Risen Angels alone, it is horribly, wonderfully clear that he is trying to map out territory in very unpleasant lands. The author’s note is fair warning:

This book was written by a traitor to his class. It is dedicated to bigots everywhere. Ladies and gentleman of the black shirts, I call upon you to unite, to strike with claws and kitchen pokers, to burn the grub-worms of equality’s brood with sulfur and oil, to hudle together whispering about the silverfish in your basements, to make decrees in your great solemn rotten assemblies concerning what is proper, for you have nothing to lose but your last feeble principles.

The book is about the long and bloody conflict between Insects and the forces of Electricity (especially the blue globes).

Flicking through the book, which I read several years ago, I see that the page corners are turned in many places, each marking some place where my reading pleasure was so great that I was forced to harm the page. It is often difficult to recall what prompted the triangular mutilation. Without context, they can just seem very fine sentences. And then there is a passage like this, which causes bells to ring in deeply sunken cellars.

Generally speaking, she didn’t have much luck. Being maladjusted she was taken to a psychiatrist, who with his encounter groups and truth serums distorted her social reality so that life lost its cutting edge. At sixteen she stood on a broken bottle barefoot, hoping to bleed to death, but her mother found her and took her to the hospital. At eighteen she jumped off a bridge, but the river below was so polluted with gummy hydrocarbons that its surface merely dimpled to receive her like an immense trampoline and bounced her up and down until she got sick to her stomach. As a freshman in college a year later, having failed both in her exams and in love, she swallowed a bottle’s worth of asprin. Her ex-boyfriend came in to her unexpectedly next morning (for he wanted to tell her yet again how much he despised her in her stupidity and weakness, and she wasn’t even very goodlooking with her long neck and big nose and weak eyes, to say nothing of being a lousy lay, and he was fucking tired of the way she held onto his letters and he was going to get them back); and she was still alive, though red-faced and wheezing, with a suicide note lying on the bureau. Much like mild-mannered Clark Kent in his pre-Superman days, dear Emily was always doing the wrong thing in the wrong place at the wrong time in some trivial pathetic sort of way like most people one meets in our great Republic except that they are straitjacketed against adverse circumstances by the power grids that run screaming day and night beneath the surface of the neighborhood parking lot and in our furnaces and boilers and air conditioning rerun clamps so that no one ever has to deal with the hot muggy horrible outdoors of reality unless there’s a power failure somewhere, though maybe we get a hint of it when there’s a brownout and the oven takes longer to cook and the Announcer’s voice slows down and his face flickers and melts into an incomprehensible blue globe for just a minute and then all’s back to normal.

There are so many reasons why this appeals to me. At the broadest level, there is the sweep from the personal to the societal, from the interior thoughts of the loathsome ex-boyfriend to the talk of ‘our great Republic’.

There is Vollmann’s shift from horror (her standing on the broken bottle, on purpose) to absurdity (her bouncing on the polluted water) and then onto cruelty (not simply the attempted suicide, but the fact that she is, via the parethetical comment, being mocked while trying to kill herself), all in the space of four sentences.

And then there are the blue globes which scare the beejesus out of me.

Vollmann has also written books about being in Afghanistan, riding in boxcars, povery, violence, and most recently, Imperial Valley in California (a shorter volume of merely 1,344 pages, due out this month).

His most recent essay (on photography) can be found here.