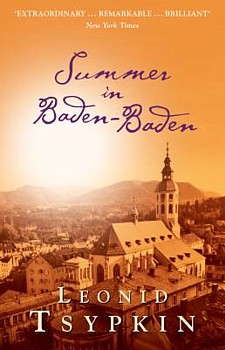 Summer in Baden-Baden by Leonid Tsypkin is a novel about what it means to love literature. The novel recreates the life of Dostoevsky, focussing mainly on the summer of 1867 when he and his wife Anna visited Baden-Baden. It is also an account of the narrator’s journey to Moscow, during which he visits places Dostoevsky lived and wrote about. The novel switches between these without warning, but the boundaries between these are quickly blurred, not only because the narrator, in the novel’s present, is so preoccupied with Dostoevsky, but also because both are written in the same style. Each paragraph, whether several lines, or five or six pages, is only a single sentence, full of diversions, qualifications, evasions, and digressions. Here is Dostoevsky’s reaction to Christ in the Sepulchre by Holbein the Younger, a painting that ‘was enough to make you lose your very faith’.

He stared at the picture with renewed intensity- and for a few moments it faded, even seemed to dissolve, and in its place there appeared the familiar faces: the red one with the lynx eyes, the squashed one with the protruding eyes, and then the faces of those performing the round-dance, before positioning themselves in a semi-circle at the summit of the mountain, and begining to point their fingers at him, sniggering and winking at each other, making him want to get down from the chair, but the next moment they all disappeared and he saw clearly once again the face and body of the dead Christ and heard the words about loss of faith spoken by someone else- and this idea was to become the focus of the novel, and then there began to emerge from the mist a few still indistinct objects, scenes and images: a gleaming knife- one peasant stabbing another and raising his eyes to the sky with the words: ‘God, forgive me for the sake of Jesus Christ’; then a soldier selling his pewter cross, pretending it is a silver one; words about God uttered by a simple peasant woman as she sees her baby smile for the first time; an exchange of crosses between the two main characters of the novel; then an unusually deserted Summer Garden with storm clouds thickening over the Petersburg side; a knife gleaming again somewhere in a dark corridor in one of the cheap Petersburg hotels near Liteiny Propsect and the quick glance of tiny, fiery murderous eyes, and a knife gleaming again in the darkness as it is driven in beneath the white breast of the proud and fallen woman.

The effect of these single-sentence paragraphs is to trap the reader within the flights of association that Dostoevsky is portrayed as being subject to, many of which revolve around climbing or descending a mountain, at the summit of which is a Crystal Palace (there is an irony here, in that Dostoevsky frequently mocked this image, which appeared in Chernyshevsky’s 1862 novel What is to be done?, as an idealised communal living space– in Notes from Underground it is likened to a ‘chicken coop’).

The book also raises an interesting question as to why the narrator , who is Jewish, should be so interested in a writer was made no secret of his anti-semitism. This is from A Writer’s Diary:

the whole activity of the Jews in these border regions of ours consisted of rendering the native population as much as possible inescapably dependent on them, taking advantage of the local laws. They have always managed to be on friendly terms with those upon whom the people were dependent. Point to any other tribe from among Russian aliens which could rival the Jew by his dreadful influence in this connection! You will find no such tribe. In this respect the Jew preserves all his originality as compared with other Russian aliens, and of course, the reason therefore is that status of status of his, that spirit of which specifically breathes pitilessness for everything that is not Jew, with disrespect for any people and tribe, for every human creature who is not a Jew…

However, it is more in bafflement, than anger, that the narrator considers this question; at no point does the reader get the sense that it impinges on his love for Dostoevsky’s work.