My CV says that I have a Bsc in Experimental Psychology, and an Msc in Neuroscience. I seem to remember going for an interview at Oxford University for a PhD. The latter, I am sure, did not go any further, and probably mercifully. By the end of my masters I was very disenchanted with the practice of scientific research, in particular the way in which research seemed to follow scientific fashion, which is to say, funding. It was also disappointing to find many scientists, both at the start of their careers, and further on, who seemed to have little interest in theoretical questions.

Perhaps this was my own fault for having unrealistic expectations. Scientific research is not cheap, and needs to be focussed on details. But by the time I went to China in 1999, I had stopped taking even a passing interest in science. I didn’t read popular science books. I ignored headlines.

Last week, while logging into my email account, I saw a headline that made me stop, click, then read. Channel 4 had reported that a blood test for variant Creuztfeldt Jakob Disease was now available for use in UK hospitals.

Few people today seem worried about mad cow disease (the popular name for variant Creutztfeldt Jakob Disease). In the late 1990s people spoke of vCJD like it was the new Black Death. All the newspapers, both broadsheet and tabloid, contained harrowing stories of otherwise healthy people developing symptoms that looked like a mixture of Alzheimer’s and Parkinson’s Disease. Memory loss, personality changes, and hallucinations were accompanied by impaired speech, seizures, and problems with movement. Most patients died within 6 months, often of respiratory complications. The fact that vCJD’s symptoms overlapped with so many other neurological conditions meant there was no reliable diagnostic method until a post-mortem examination of the brain could be carried out. Only then it was possible to see the tiny holes in the brain tissue caused by massive cell death (which give it a sponge-like appearance) and to test for the presence of abnormal proteins.

One of the most frightening aspects of the disease was that there was no way to be certain you did not have it. CJD appears in a number of forms: an inherited form; one that occurs spontaneously due to a genetic defect; and one transmitted through the use of contaminated surgical instruments. In the case of vCJD, the cause was thought to be ingestion of beef products infected with Bovine Spongiform Encephalopathy (hence ‘mad cow disease’). It wasn’t just people who ate meat that had reason to be worried; any food containing meat by products (such as gelatin) was a potential risk. It was a wonderful time to be vegan.

In 1997, when I was still a scientist, I did a research project at the CJD Suveillance Unit in Edinburgh- I wrote about this, and what the availability of blood tests means on the LRB Blog yesterday. It made me briefly feel like someone who actually knows something about science. No doubt, this will pass.

Here is a photo of my supervisor Professor James Ironside, looking incredibly tough. 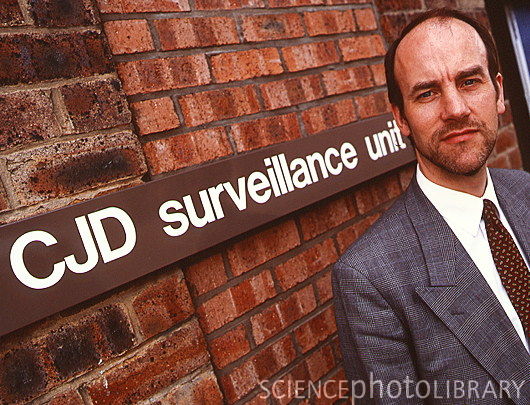